During the period May, 1994 through June, 1995, a specialized magnetic field survey system and proprietary, fully scripted large-volume active-feedback simulation program were created, debugged and tested. Using the new survey instrumentation, Beta Site magnetic field data were collected which could be utilized for optimization runs. In May, 1995, Linear Research Associates demonstrated the apparent feasibility of large-volume active-feedback a.c. magnetic field [ACMF] cancellation over protected volumes up to 26,000 m3 (918,000 ft3).

In this interim report we describe a generalized LV-EMFC active-negative feedback system and specific Phase I survey and simulation tools developed for research on its practical implementation. This report concludes with an examination of Linear Research Associates' Phase I Beta Site simulation results.

Proposed Large-Volume [LV] active-negative-feedback shielding technology.
Negative feedback is a classic engineering principle which can be utilized for a.c. magnetic field [ACMF] reduction. To implement this type of active shielding, a system of sensors, signal processor/amplifiers and driven coils is placed in each axis (one protected axis is depicted below). System operation is based on the physical principle that an axial a.c. magnetic field component, Bi, through the Protected Volume [PV] can be arbitrarily reduced in intensity by applying fields of opposite phase. Such fields are here determined by axial error components, Bi', at a specified number of sample points. At each sampling sensor's location the magnetic field error component will be equal to the difference between the incident (Bi) and compensating fields. Analytically, the a.c. magnetic attenuation at each sensor reduces to a constant factor independent of ambient variation. Compensation is wideband, covering an instantaneous bandwidth which includes the fundamental line frequency and all significant harmonics. Attenuation of the incident field in each axis is gradient-dependent but may be improved as required by subdividing the protected volume into an arbitrary number of sensor-coil cells.

Example simulation program command language compiler input file, demonstrating how the transfer characteristic of a sensor may be varied automatically.

An interpreter allows input file parameters to be stepped over a series of optimization runs and any specific output parameter function to be recorded for each iteration.

Unique features of this system are its ability to record time-resolved d.c. and a.c. vector field data (while resolving magnitude and relative a.c. phase for each axis), and its intrinsically accurate axial alignment. Shown from left to right are the system 486DX2-40 portable computer, probe instrument, battery charger and UHF-FM remote field reference monitor. For added survey height, extension sections up to 6 meters in length may be fastened onto probe body.
Large-Volume E.L.F. Magnetic Field Compensation Site System [LV-EMFS]. 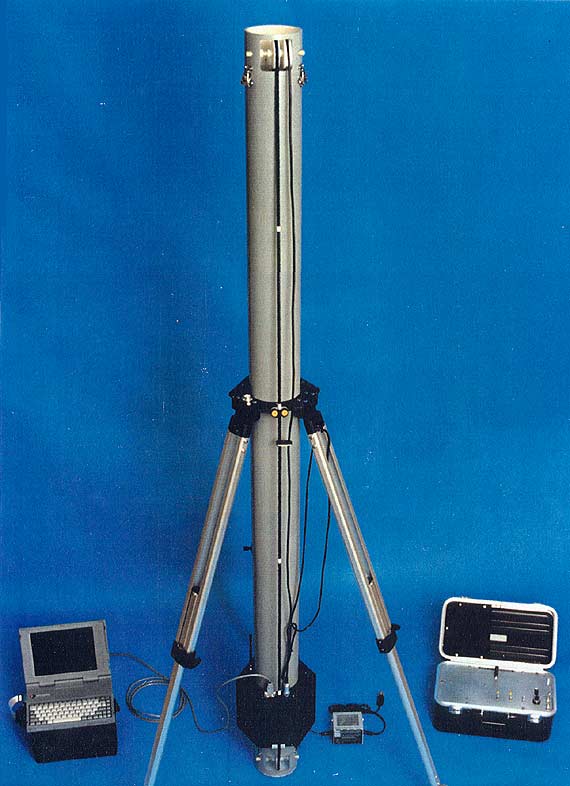 4. LV-EMFS Survey Instrument Diagram
A.c. magnetic field signals originating at the "reference sensor" are transmitted via UHF-FM link to a receiver within the Probe Instrument. These signals, along with signals from "MAG-03" tri-axial flux gate magnetometer, are processed through the intervening network and are sent via umbilical cable to a PCMCIA analog-to-digital converter card at the 486DX2-40 portable computer. 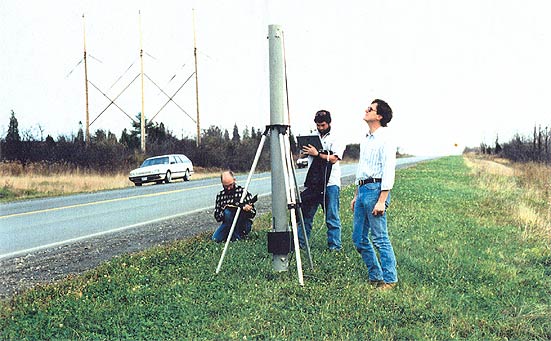 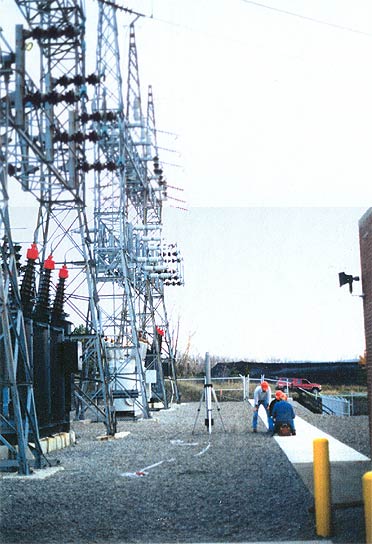 7. Fourier-Transformed Data Record
Spectral analysis is employed by the survey instrument's computer program to extract the value of a fundamental line frequency in the range of 25 to 400 Hz. This capability provides an automatic means of identifying the basic source frequency for calculations such as relative phase.

Note excellent agreement of magnitude plots, good agreement of phase data and  negligible variance in either data set. Deviation of phase survey data from simulation values over the -20m to +30m interval has been found to agree with ground conductivity effects not modeled in the simulation program.

Overall building dimensions are 42m [128'] x 5m [16']. A.c. magnetic field values ranging between 7 and 14 milligauss, rms have been recorded in rooms which face a nearby, roughly parallel 4-circuit 345 KV right-of-way. At its closest approach, the near edge of the right-of-way lies approximately 14m [46'] from the Site structure.

Pointblock magnitudes (i.e., discrete ACMF values on grid of specified resolution) corresponding to the source field are calculated by the simulation program for a best fit to survey data. To generate field magnitudes and relative phases, our simulation model employs an accurate physical description of the 4-circuit transmission line array and its known phasing, and scales the overall line currents as required to best match actual survey data. Uncompensated fields average about 0.61 µT (6.1 mG), rms, over the first 20 m of the building nearest and perpendicular to the source transmission lines.

Phase I evaluation of simulated active-feedback system for a building such as the Beta Site is multi-step process. First, a detailed magnetic field survey is made throughout a volume which includes the proposed site protected volume [PV]. Next, simulation models are created which produce a close approximation of the survey a.c. magnetic field data. Finally, the active-feedback components (sensors, transfer characteristic and driven coils) are added, along with initial and step parameters, and the optimization iterations are begun. In the proposed Phase II development, a pointblock data integration module permitting direct entry of survey data into the simulator will be added to the simulation code package.

For the so-called permanent solution, subject to further optimization studies, several driven coil and sensor placement constraints applicable to the temporary Beta Site installation have been dispensed with. Hallways, for example, are no longer relevant to cable placement, since lower z and y cable segments can be routed through arbitrarily located conduits under the protected structure. Only 9 driven coils are required in the permanent case. The coil locations shown here have been determined by means of optimization scripting in the simulation program.

A x-y axis slice is taken at Z = 1m, which corresponds to a z-axis region representative of highest human occupancy in the single-story Beta Site building. A.c. magnetic field magnitudes through the PV are significantly lower than in the uncompensated case (Panel 10).

Noteworthy are the relatively low average values and peak-to-avarage ratios achieved for both By and Bz components. Both factors are essential indicators of compensation quality. ACMF fields over a large portion of the building interior attenuated to 1mgrms or less.

In this plot, survey record Bx,y,z magnitude/phase data have been used to compute relative ACMF phase variation within the site structure. This plot reveals phase shift due to the presence of electrically-conductive structural members throughout the building. Phase variation related to the structural symmetry is plainly visible, with a skew which is due to slight non-parallelism of the building and the transmission-line source right-of-way. Analysis of this survey phase data suggests that compensatory phase shift may be programmed into the LV-EMFC signal processors to increase the active-feedback system field attenuation coefficient in most installations.